The announcement that the Nobel Prize in chemistry for the year 2009 has been awarded to three crystallographers, Thomas A. Steitz (Yale University, USA), Venkatraman Ramakrishnan (Cambridge, UK) and Ada E. Yonath (Weizmann Institute, Israel) fills with proud the crystallographic community.

The structural studies on ribosomes, which are the largest molecular complexes containing up to 100000 atoms, have provided precious information on the mechanisms of life. In fact, these complex units, which are combinations of RNA and protein, are prodigious factories (catalysts) where the protein chains assemble together, aminoacid after aminoacid in the proper sequence. This is coded piece of DNA called “gene”, which acts as the imprint of the replication. The proteins are the basis of most biological activities but, when they are expression of bacterial ribosomes, they become harmful to the organism.

The usage of X-ray diffraction to analyze at the atomic level the complexity of the ribosomes and to reconstruct their functionalities in terms of structure-properties relationships can be exploited for therapeutic purposes. In fact, the bacterial ribosome is the target of about 50% of the antibacterial drugs. The availability of high resolution structures is of primary importance in order to create new antibiotics, which inserted in the ribosome’s cavities, inhibit the protein biosynthesis Thus structural information allows the design of tailored drugs that do not present resistance to the pathogenesis as occurs for more common antibiotics.

The topic on how the ribosomial crystallography helps to fight pathogens by suggesting the best suited antibiotic molecules was tackled by Ada Yonath in the lecture that she delivered at the world congress of crystallography (XXth IUCr, Florence 2005) which was attended by 3000 participants. There were three Nobel laureates amongst the speakers but it was also predicted during the opening ceremony that future winners could be hiding amongst the other outstanding speakers. This is the case of Ada Yonath. She gave the permission to the organizers (Carlo Mealli, Paola Paoli and the entire Italian Crystallografic Association, AIC) to maintain in the congress website (www.iucr2005.it) the file of her presentation. Today, the possibility of downloading the lecture (only for academic purposes) evidently has a special added value (http://xxiucr.iccom.cnr.it/ms94.htm). 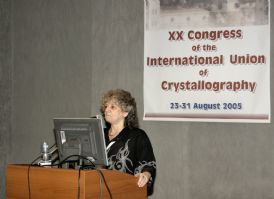 Ada Yonath during the IUCr Congress in Florence

The president of the AIC, also on behalf of all the other members, expresses his deepest satisfaction in underlining how the X-rays diffraction techniques (associated to farsighted capabilities of interpreting the structure-properties relationships) have once again favoured Nobel prizes awards to crystallographers. The value of the discipline has reached similar high levels several times in the past.

Particular congratulations are addressed to Ada Yonath, who belongs to the European Crystallographic Association (of which the AIC and the CNR are adhering bodies) and has participated in the past to several crystallographic events in Italy.