For the 40th anniversary of the AIC foundation, a special prize has been introduced entitled to the memory of Professor Mario Mammi to acknowledge his contribution to the development of the Italian crystallography. The award is assigned every two years and will be appointed to a scientist, who has obtained excellent results through the development or the application of crystallographic methods in a given scientific field. 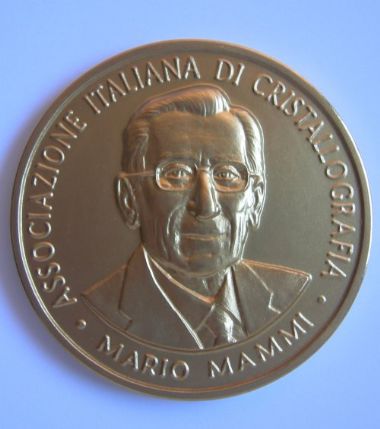 The awarder can be an Italian or foreign scientist, whose research has been carried out mainly in private or public, Italian institutions (or at least with an Italian partnership). The scientific results must have been innovative and of reference to the scientific community worldwide. The prize consists of a certificate and Gold medal coined with the image of Mario Mammi.

The nominations, presented by at least two renowned AIC members, must be supported by the appropriate scientific justification and the CV of the candidate. It is important that the most remarkable results obtained by the candidate as well as his/her scientific influence in a particular discipline clearly appear in the motivations of the candidacy.

One nomination lasts for two sequential editions of the prize, unless the candidate has reached the limiting age. The award is appointed through an unquestionable judgement of a commission named by the AIC board (CdP).

For the Mario Mammi Award Call 2011, the documentation must be submitted by e-mail to the AIC secretariat (presently, Dr. Valeria Ferretti, Dipartimento di Chimica, Via Borsari 46, 44100 Ferrara, e-mail address: frt@unife.it) within April 15th 2011.

The ceremony of the award will take place during the 40th AIC Congress to be held in Siena (September, 19-21, 2011). The winner will be invited to present his/her most outstanding research results in a plenary lecture.

The winners of the all the Mammi Prize are listed in the Medals and AIC Awards page.