He died unexpectedly in his Sicily (in the hospital of Trapani), a few days after closing the latest Course of the Crystallographic Schools in Erice, which was, as usual, an outstanding success. To underline the height reached by this 42nd Course entitled “Structure and Function from Macromolecular Crystallography: Organization in Space and Time” (Directed by TL. Blundell and M.A. Carrondo), it is worth mentioning that three Nobel Laureates had accepted to be amongst the teachers. Lodovico had decided not to return immediately to Bologna but stay in Erice, because he thought that his deep
knowledge of the Erice’s local organization, could be helpful also to the following course, still related to crystallography, namely that of Prof. Tsoucaris on Structural and Molecular Archeology. 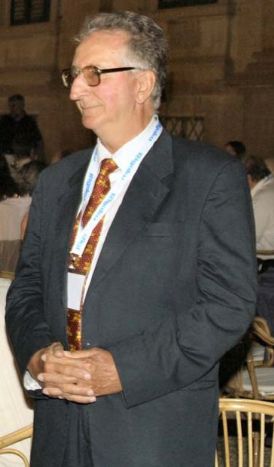 We wish to remind Lodovico with the satisfied expression of the present photo, which was taken during the banquet of the XX IUCr Congress in Florence 2005, when the Union decided to award him a very special prize for the great merits in the diffusion of Crystallography in the world.

Professor Riva di Sanseverino leaves behind his wife Fiorbellina, his son Clemente, his doughter Claudia and two grandchildren. The board of the Associazione Italiana di Cristallografia offers warm condolences to the entire family, the closest collaborators (Paola Spadon, in particular) and all the crystallographers who will miss such a dedicated person.